I will always have positive vibes about the 2014 handicapping season, culminating in my first-ever qualification for the National Handicapping Championship (NHC).

Two-plus weeks later, however, after analyzing the outcomes of my 40 picks over three days (30 in the "main" tournament on Friday and Saturday and 10 in Sunday's "consolation" tournament), I give myself a resounding "F" for performance over the first two days and about a B-/C+ for Sunday's consolation tournament.

To be blunt, I was awful my first two days.

As is my demeanor, I would never sugarcoat my performance, which was the equivalent of a single-A rookie getting schooled by a Randy Johnson fastball.

The NHC in Las Vegas really proved too tough a test in my first effort, not so much from a perspective of being overwhelmed by the number of races, or psyched out by the level of competition, or ending up in a roadside ditch after a night of partying a la The Hangover.

Rather, the following assessment, more is less, provides an honest analysis, and is maybe the equivalent of tossing a golf ball into the lake in front of the tee box as a superstitious appeasement, of sorts, to the golf gods before tee off...in hopes of clearing the water with the real tee shot.

From this day forward, similar to the golf ball embedded at the bottom of that tee box pond, my NHC XVI gets locked in a vault, never to resurface.

It's all positive thoughts from here forward.

If nothing else, I was not deterred, since the Day 1 leader had a low (by historical standards) ~$115 final bankroll, giving everyone in the tournament hope of a big Day 2 turnaround.


The biggest difference for me Saturday from a handicapping perspective was a better card than Friday's, where in advance I plotted out all 60-plus races from the 7 contest tracks chronologically, by race surface and distance and field size.

Aqueduct had cancelled on Saturday but was as bad as Friday's awful card anyway, making it easier to be patient and map out the types of races I wanted to play, namely turf sprints.   This was a bit of a change from Friday, where I found the card generally ho-hum and used more of my 8 optional plays earlier in the day, where I determined there was more value.

I went into the card very loose, with no preconceived notions, but little handicapping either under the premise that my five hours of intense handicapping of Friday's 8 mandatory races was a waste.

I also did not want to go to Vegas to hole myself up in my room reading past performances after spending about 8 hours doing that on Friday.  My eyes and mind needed a rest.

The fruits of my lack of labor were five picks nowhere close to winning to start Saturday.

Selection #6 essentially sealed my fate and put me in a relative tailspin from which I could not recover for another 3-4 races.

Stuck between two horses I liked in the 20-to-1 neighborhood in Race 3 from Oaklawn Park, I ultimately sided with the wrong one, as Awol Adam connected at nearly 22-to-1 while my selection, Costilla Range, faded to finish 7th of 10.  Add Joe Rocco Jr. to my "never wins when I bet but no doubt loses when I do" list, alongside Joe Bravo.  Rocco rode Awol Adam beautifully. 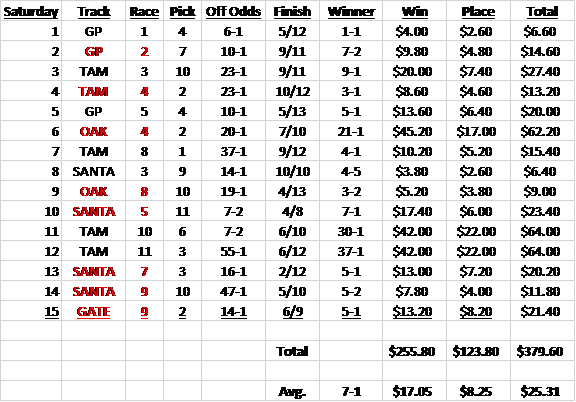 Out of frustration, I rushed two (in hindsight) indifferent plays on horses not even close with my next two selections.

At that point it was game, set and match.


Knowing that I had little chance to advance to Sunday's championship round (top 50), I relegated myself to using my final 4-5 picks on Saturday (and 2-3 successful side wagers) to prep for Sunday, regardless of whether I got on the board or not (which finally happened on my 28th tournament selection).

This strategy proved somewhat successful in Sunday's consolation bracket, as I nailed the biggest price on that afternoon's generally chalky 30-plus card.  The 10-to-1 winner put me within the Top 40 and I held my place with a near-miss place runner in my eighth (of 10) selections, but could not connect with my final two picks.  I finished somewhere around 95th. 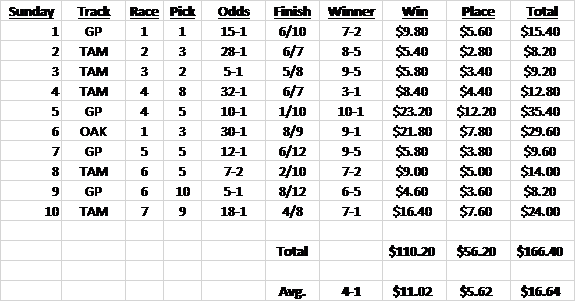 The spreadsheet recap of my NHC debut is not at all pretty.

Friday was a tough day for most contenders in the ballroom, but over the first two days I went a little too heavy on long-shots as is my penchant, but even when I went to lower-priced horses I liked, nothing connected.

Sunday's effort proved somewhat inspiring for me in that I did not come home to frigid New Jersey without a first-place runner, and that I have definitely improved on the patience scale, in terms of not trying to diagnose (and subsequently) play every single race as I had in my earlier days.

There were 30+ races to play within a 3 hour window, and I passed on several deemed unplayable (either fields too short or conditions outside my comfort zone).

There's really no moral to the story, other than the NHC is a tough road that I absolutely expect to hit again, and I would posit that all handicappers (not just me) go through stretches where they cannot find a winner or their top selection simply gets a bad trip or loses a photo finish.  Sometimes the handicapping is great but the anticipated outcome is not.

In Vegas, my handicapping was the opposite of great, but I guess so was that of hundreds of others, even people with multiple entries in the tournament who failed to crack the Top 50 or make it to the final table.

With that, I am back down to the claiming ranks, building my bankroll through some online tournaments, getting back into the NHC swing through an unsuccessful HorseTourneys.com qualifier this past Sunday, and bracing for Simulcast Series Challenges #2 through #4 this winter.