I want to dust off my blog today to share a very meaningful tribute by my good friend and fellow NHC Tour competitor, Marie Jost, who reminds us that March 29 is National Vietnam War Veterans Day and had a close connection with a man she got to know over several years at Monmouth Park -- Frank Diciaulo, who served in combat and was a Purple Heart recipient.

"Frankie" passed away in late 2015, but Marie's post to Facebook this morning reminded me of a tribute that she had written in the time after his passing. As I understand it, Frankie was pretty much alone until the end, and Marie advocated for a proper memorial and military burial.

Marie's words are touching, and if nothing else say a prayer on this special day in memory of her friend and avid horseplayer, and for all of those that served. 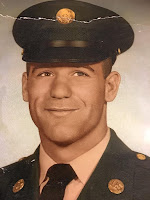 "Frank Diciaulo...served in the 27th Infantry Regiment nicknamed "The Wolfhounds." It is my understanding that the Wolfhounds saw some of the worst of the fighting during the Vietnam War. Frank was wounded in the line of duty and was awarded the Purple Heart. Sadly, Frank passed away on December 8, 2015, and remained unclaimed at the county morgue.

"I met Frankie at Monmouth Park years ago. We used to talk horses and he'd always ask me, "Who do you like, Doll?" and then he would run to the window to bet it. He was a real sweetheart of a guy.

"Frankie gave me these pictures of himself because he had no one else to pass them along to and there was an unspoken understanding that he really wanted someone to remember him when he was gone. Frankie had cancer and knew he was dying. These pictures were no doubt his prized possessions. They represent a time in his life that he was most proud of and I am honored that he chose me to give them to. 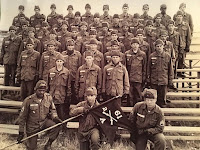 "I'm happy to say, Frankie will receive the honor and respect he deserves with a proper burial this afternoon at the Brigadier General William C. Doyle Veterans Memorial Cemetery. I will miss seeing him at Monmouth Park. I will miss him calling me Doll and blowing me kisses when he saw me. So today, remember a veteran and say a prayer for them and for the people who remain unclaimed. Frankie lived, and he was my friend."

Posted by Bill Holobowski at 7:04 PM