An afternoon meant for horse racing! 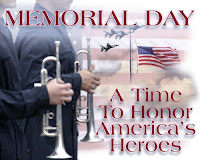 No self-deprecating rants about my handicapping ineptitude or the downward spiral of NJ's live racing program...just excitement about the weather and a family outing at Monmouth Park this afternoon.

Thanks to the men and women of U.S. Armed Forces, civilians like us get to enjoy a wealth of freedoms and frivolities (i.e., horseplay). Let's do our best to acknowledge our service members not only this weekend, but all year, and say prayer for those who perished in the line of duty.

In searching of a military-themed piece tied to horse racing, I stumbled upon this story from VegasInsider.com, leading up to the 2008 NHC in Las Vegas, where a U.S. Army sergeant, Chris Lavezza, had earned a spot in the year-end NHC Championship after finishing 4th in an online qualifier...while serving in Afghanistan as part of Operation Enduring Freedom!  Here's a great quote from that story:


"The NHC helped take my mind off the gravity of being in a war zone,'' said Lavezza, who spent most of his time in Afghanistan in a compound in Kabul. ``You have to be vigilant every day out there especially when you travel given the existence of I.E.D.s (Improvised Explosive Devices) which can be anywhere. You just never know what's going to happen from day to day in Afghanistan.''

Imagine handicapping under such stress, though like many of us, the handicapping hobby is a release from the daily routine for many. Subjection to enemy gunfire is obviously far from routine, but you catch my drift.

I had a hard time navigating the NTRA website and others in trying to find out how Mr. Lavezza finished at the NHC, but it warmed my heart to see that not only did he qualify, but the NTRA's press release about his qualification tied Mr. Lavezza's interest in the sport to trips to Penn National with his father as a kid. Many of us have similar bonds, and as a horseplayer it is great to read these kinds of pieces, when there are misconceptions about horse racing as a sport of a lesser ilk.
Posted by Bill Holobowski at 10:29 AM