The scenery at Atlantic City Race Course hearkens to Bruce's famous "you ain't a beauty, but hey you're alright" lyric from Thunder Road, but once again struck a chord for me, the NJ Horseplayer kids and my folks and about 10,000 other fans of live racing for Sunday's fourth of six cards at the Mays Landing track.  Tuesday is closing day.

Although none of the NJ Horseplayer family hit a single winner (we're mostly an exacta-leaning bunch, often known for picking first- and third-place winners) on the six-race card, it was well worth the trip, and a shame that the track cannot extend the meet a little longer or consider a similar autumn meet (rather than running live in front of a smattering of fans at Monmouth in late November, like in 2010).

Putting aside the ramshackle grandstand, scratch parking lot, lack of live tote and inability to hear the track announcer while watching from the track's apron (kind of like attending a Rutgers men's basketball home game, where the PA guy is inaudible), ACRC offers a festival atmosphere and signals, in small doses, that live racing is far from dead.  Marketed properly (and with drastically reduced takeouts and perhaps free admission at Monmouth, like at ACRC), the thoroughbred sport can succeed in the Garden State, Mr. Christie and horsemen!

Inside the grandstand: people elbow to elbow for most of the afternoon (but without any fights, unlike an Eagles game), and space in the paddock got tighter ahead of each post parade as the afternoon progressed.  There was definitely a vibe in the air, with people of all walks, from track regulars to families with toddlers, enjoying the action.  The courtesy of the tellers, track volunteers and others - outside the overzealous security guard hellbent on reprimanding kids moving faster than a crawl - was impressive, and clearly the patrons seemed to enjoy themselves on the breezy 60-degree afternoon.

Based on the outcomes (0 for 6), I spent way too much time handicapping in advance and, similar to prior ramblings focused on handicapping contest strategy, I fell into similar traps of moving off of horses that were totally logical but, in my view, were at odds too low, which is a bad strategy at a track where it is almost impossible to follow the live odds.

Race 3 was a perfect example.

Readers may recall my commentary Sunday about this race in particular, especially my stance against 2-to-1 M/L favorite Tenplus, who entered the 12-horse maiden special weight event at a mile-and-a-sixteenth on the turf with easily the top one-time Beyer figure (74 on an off track at Fair Grounds in January 2010) and a 31% winning trainer. However, I stood against, owing to concerns about a year-layoff off that top race, a subsequent 43 Beyer on the horse's next outing at the same distance on turf, and that the horse never factored in two more maiden tries, including a big drop from $38k special weight to a $12,500 claimer condition on March 18 at Gulfstream.

Tenplus went off as second at 2.6-to-1 but (unfortunately my most accurate handicapping call of the afternoon) was pulled up on the backside and vanned off, which is the absolute last thing any horseplayer ever wants to see on the track.

The top choice, Boston Pops Band, who had a nice second-place effort in his third lifetime start (at age 5, usually an automatic throwout for me), looked visually the best in the post parade and was closer to 2-to-1, but I stuck with my morning handicapping and boxed my bomber $10 exacta of Hollywood Lou (10-to-1 M/L) and Royal Tea Time (30-to-1 M/L), hoping the combo of Angel Serpa and first-time blinkers would help the latter's cause for a miracle top-two placing.

The intelligent, more-conservative play would have been a 3-horse box at a lower denomination, since I didn't like anyone else in the field, but therein lies my problem - bankroll management. I went for the dicier call and it hurt, as Boston Pops Band won over Hollywood Lou (8-to-1 final odds) and paid $45.60 for a $2 exacta.  Royal Tea Time ran well for about three-quarters but faded to finish 9th and I could tell was not of the winning caliber after a quarter mile.  Lou, however, was the right call to at least play underneath and, if not for being bumped at the start, might have fared better than a two-and-a-half length place finish. 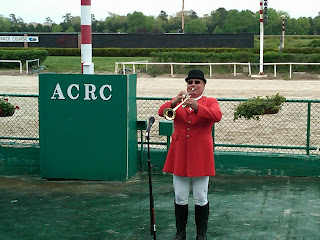 Meanwhile, I did stick to my guns (for the most part) in using half of my allotted bankroll on Race 4, convinced (as noted Sunday) that Hippocrates Jones (6-to-1) was ready to score - $20W, $5 exacta box with Odds and Evans (7-to-2 M/L) and Sweet Rascal (10-to-1 M/L) - but in my opinion jockey Casey Fusilier sat the dead closer Jones WAY too far back off the pace and the horse rallied belatedly to finish fourth, about four lengths off winner Sweet Rascal, who ended up at 11.5-to-1. Ouch!

The final race was a compelling 5-furlong sprint, where I had half of the exacta (runner-up Local Celebrity) but my bullish view of Lawdy Me (6-to-1 M/L, who was 4-for-8 at the distance and 3-for-3 with the jockey) proved flawed as the horse finished a well-beaten sixth after a sluggish start.

The visit proved a modest monetary setback for the NJ Horseplayer faction, but nothing beat the companionship and intellectual challenge of handicapping, the sound of hooves hitting the turf, $3.50 beers served by Hooters waitresses and all other visual and olfactory pleasures of a day of live racing at the track.
Posted by Bill Holobowski at 11:31 PM